Ben (aka Maul Cosplay) started his career as a film stuntman and has been a hobby cosplayer for 10 years before he became a professional cosplay promoter who is well known for his work as Geralt of Rivia (The Witcher), Arthur Morgan (RedDead Redemption 2), Joel (The Last Of Us), Eivor (Assassin’s Creed - Valhalla), Scorpion (Mortal Kombat), Zane (Borderlands 3) or V. from Cyberpunk. He produces his cosplays, props and photospots on a high quality level for video game promotion. Ben always focuses the most on the authentic looks of his characters and the smallest details. As one of the most talented stage combat fighters of Europe, Ben has also gained some attention through his performance of Darth Maul in the Youtube fan film “Darth Maul Apprentice” and Ubisoft’s live action trailer for AC - Valhalla. Quite contrary to the badass attitude of his chosen characters, it is the most important thing for Ben to be within the crowd at conventions, talk to fans and followers and spend as much time as possible with everyone around. Oh, and he loves Disney songs. ;) 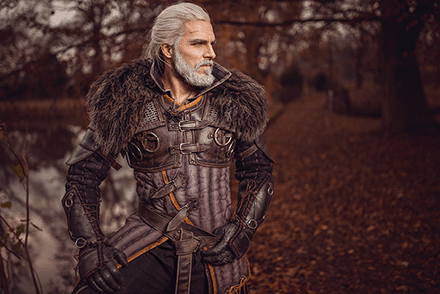